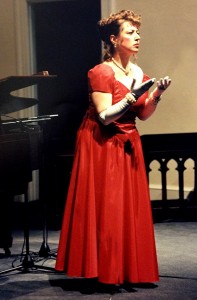 A versatile soprano who is often in demand, Marianna Vagnini has appeared in operatic and concert performances throughout the United States, Europe, and Russia.

She has appeared as Mimi in La Bohème, Georgette in Il Tabarro, The Countess in The Marriage of Figaro, Fiordiligi in Cosi Fan Tutte, and in the title role of Suor Angelica. Connecticut audiences have seen her as Tamiri in Il Re Pastore for the Connecticut Concert Opera, Lola in Cavalleria Rusticana at the Shubert Theatre in New Haven, and Violetta in La Traviata for the Waterbury Opera Theatre. Concert engagements have included solo performances with the Waterbury Symphony, the Connecticut Choral Society, and the Stamford Master Singers.

Upon her return from performing at the Imperial Palace Hotel in Santa Margherita, Italy, Ms. Vagnini recorded a newly commissioned work by the award-winning composer Manyee Lam for the Ballet Theatre of Hong Kong, for the World Premiere of this work in November, 1996.

In July of 1999 Ms. Vagnini performed Operatic excerpts at the Altenburg Music Festival in Altenburg, Germany, David Kram, Conductor, and at The Castle in Altenberg, Germany, Rolando Russo, Accompanist.

She has been singled out in serveral competitions, including the Baltimore and Connecticut Opera Competitions and was a semi-finalist in the Marian Anderson Competition. Ms. Vagnini received a silver medal for the Eastern Connecticut Opera Young Artist Award Competition, and most recently received a grant from the Waterbury Foundation for study in Italy, where she worked with Irisi A. Cordetti, Gabriella Tucci and Gianni Raimondi.